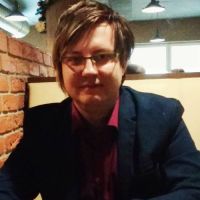 I am a very versatile person and I think that one should not be content with what he / she knows or has because one can always go up a level:]]

I am low-level and high-level programmer

As a low-level programmer, I focus on developing projects and libraries HAL (Hardware Abstract Layer) for microcontrollers MCU on the lowest layer. These types of projects are published in section >>MCU Projects<< or>>MCU<<. In this respect, I am actively working with MCU series PIC 24FJ. As a low-level language, I use variant C supported by the C30 compiler along with the MPLAB IDE.

In the future, I will use low-level programming to develop and build drivers / drivers under the kernel OS Windows NT


As a high-level programmer I am active in several ways.
The first direction is IT-Security. I have been working on malware testing that year. I write my own utilities to repair or fix system errors under NT platform. I focus on simulating and breaking security and testing the security of access to NT itself. Simuling consists in inducing a situation after a malware intervention when testing utilities practices such as ComboFix utilities.
For my own needs I write my own sample malware and then utilities that can fix potential errors.
Part of the written utilities are published in sections  >>Projects<<.

Currently I focus on the principle of security of intelligent malware attacks - creating and testing Zombie-network, deployment and security solutions against them.

The third direction is development. As a developer, I work on software such as remote terminal control software, RGB effect control software, and the like. Software of this type will be published in the projects section for >>MCU<<.

On forum viry.cz I am member and a founder CyberSecurity Unit,where I continue to act as security authority forum viry.cz, certificate: ► Certificate ◄

I worked with AV Avira to send my tests and comments on malware. Currently, you can meet me in the following forums:

Scripts in which I have not written any utility: MS-Dos (cmd), VB-Script.

At the VŠB-Tuo Faculty I was active as:

So that everything does not only revolve around units and zeros, I can approach some of the few of my free time.

I love sleeping, traveling, nature.
I do not have much time to read books, but there is a place for specialized literature, psychological literature.
The music I prefer is Trance - Infite, E. Hewitt, S.O´Shine, Owsey R., Dash Berlin,  Christina Novelli, Gareth Emery, Armin van Buuren
Ine Kafe, Sum 41, M. Garrix

Obviously, everything essential to me:]]. Once again I wish you good luck and even more knowledge and information from the site.